So. I have been reading LOAAAAAAAAADDDDDDDDS of fashion magazines and online articles as research for this book I have in progress, Unleash, the last in the Sub Rosa series. The first two books deal more with the mystery at the heart of this story but the third and final book juggles how the fashion world works—so, what talented writers, editors, designers and photographers etc have to overcome to get where they want to be.

The Sub Rosa trilogy is fashion-based but it is about much more, too. There was one ‘fashion’ article I wedged into the first instalment, Unbind that I wrote very quickly. It came naturally to write it but that was only after reading many, many an article, trying to get an image of how Chloe would present her story in just a few words.

The magazine Chloe works for is called Frame but it is loosely based on Vogue. I hasten to add, very loosely! These books are not The Devil Wears Prada, NADA! In Unbind, you can read Chloe’s article approximately 70% of the way into the novel. It’s called Mind Over Body and the last few words of the article read thus:

Give some purpose to the hurt you suffered because if there wasn’t any grand scheme for the mark thrust upon you, there might still be something you could do to help someone else who didn’t have a choice. Another story springs free, yet I save that for another day…

The other story that springs free is Kayla Tate’s story which will feature in part three, Unleash. It’s only really in the past few weeks that I allowed myself to finally believe I could pull off another trilogy! The third book is from a totally different POV and I told myself trilogies don’t normally happen like this—however I’ve since learned that Kayla is integral to Chloe’s story and so this series without her would be no series at all. Kayla’s relationship with her body is quite an interesting one and one I’ve not written about yet, but you’ll have to read the book…

We all have shit days

We all sometimes feel fat, spotty, thin, empty, greasy, grimy, ugly, too much of this, not enough of that. We all have those days where you feel shit. Nobody is immune. I am no supermodel nor am I a size ten, I range from a 12-16 depending on what shop I go in, what time of the month it is or whether I’ve just had a baby or not! However, despite not being stick-thin, I absolutely love fashion! I love it. (By the way I recently got told that if you tell someone they are too thin, it’s like telling someone they’re too fat. It’s the same apparently.) I loved it when Adele featured on the front cover of Vogue. I love it when supermodels do, too. I have read fashion magazines since I started school, so that’s about 20 years now. I didn’t read them thinking, Oh my god I need to be that thin! I didn’t think like that and why? Because I had a solid grounding from my parents. Yes, the modelling industry does have unhealthy aspects, but I still love it and long ago, I accepted I am happy as a healthy 12-16 (I know, LOL) but when I was a 10 I was unhappy, unfed, looked ill and felt ill – I am just naturally curvy and tall at 5’9’’ so when I’ve dieted in the past, people knew straight away because a sack of skin doesn’t look good on me. I accept fashion isn’t real life and like fiction, it is whatever you make of it. Jamie Dornan recently said modelling “was a bit silly” or something along those lines, but I bet he’s not complaining now he’s got himself a certain part! 😉

I’ve met more than a few men who say they really aren’t bothered by measurements and don’t notice whether the lady in their life drops 10 pounds or gains 10 pounds. It’s just not an issue for the average man. Loads of celebrities have done the whole big weight-loss thing and have written afterwards that their husbands didn’t fancy them any more or any less, because what they fancied in the first place was the person. At the end of the day, how we feel starts from inside and being healthy mentally and physically is something we all strive for—though for some it is harder. For some people, it just is harder. Full stop. 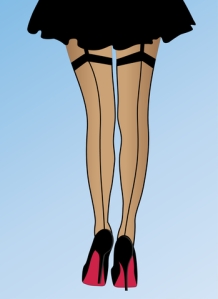 Fashion is linked to the mood of the time, like the skirt. They say the length of a skirt shortens more, the worse off the economy is, because obviously we need a bit more cheering up. In times of austerity, some designers have had to get more creative and deal with what they’ve got—like creating dresses and outfits from garbage. I try to read and absorb as much as I can when I’m writing a book because I am a former journalist and I can’t shake off that side of myself. I write to represent people, to speak for them, and I want to be honest and truthful in what I say. Some say when they read a book they don’t want reality but I say, when I was growing up I used to love reading books where I could imagine the characters out there somewhere, living their lives. Personally I need an edge of believability in my work for me to take it seriously. So the fashion of here and now in terms of books (I mean with regards to what instantly flies off shelves) seems to be erotic romance. But with so many people writing erotica, erotic romance or romantic erotica—you now need something else to make you stand out! Which is why I jumped on the bandwagon of writing romantic thrillers.

Fashions change and so do tastes

Yes, women love sex in their books. It helps. I know erotica has saved some marriages and I have massive respect for that. I think whatever empowers and makes women happy is great, I really do. Whatever floats your boat. Some people told me there was too much sex in my first erotic novel A Fine Profession and maybe there was, or maybe that person or person’s tastes just weren’t catered to. A lot of other people argued the story was the strongest aspect so maybe people were reading different books? Which is another thing—we can never please everyone with what we write. A lot of people genuinely believe A Fine Profession is based on my own experiences but it really isn’t. I never spanked men in hotel rooms although I have held a whip and I do like corsets. However I know a couple of people who are like Lottie and when it came to putting the book out, I decided I would be happy if the words within helped just one person. Luckily the book helped many. If people think I am Lottie, it means they actually believed she’s real—which was what I set out to do. Lottie has an acute case of low self-esteem.

I’m the eldest of three sisters and I have a younger brother too. My youngest sister is a pear shape and has men salivating over her ass, my middle sister is athletic and I’m hourglass. We’re all different. Two of us are big-chested (one of those is my brother, by the way—he won’t care if I say that) and one of us was so happy when she was breastfeeding because she finally had boobs. We’re all different but any body issues we’ve ever had haven’t been picked up by images in the media. It’s just biology.

A lot of men and women have struggles with their bodies for deep, psychological reasons that are buried deeper than we imagine. You only have to read A Fine Profession to realise that. There isn’t a chart for how we feel inside and no sexual partner can fix it. Most of the research for my books is already in my head—because I’ve spent so many years logging so many different people’s tales. Never one to shirk, I’ve also spent a lot of time writing about men’s issues too, such as Noah’s in A Fine Pursuit and Cai’s in Unfurl.

So, I’ve read a lot of magazines as part of my research of Unleash. A lot of articles. The heroine Kayla Tate is an up and coming jewellery designer and she’s worked for Elle, too. Her experiences and impressions of the fashion world are genuine and she’s a humble, talented and yet quietly opinionated woman.

I have never had so much fun researching a book because Kayla is such a multi-dimensional woman and the heavy metal she loves, well, I won’t tell you what I had to do to find out about that!

Let’s say, she’s not an ordinary woman and it’s been difficult picking a partner for her who’s worthy!

Unleash remains a work in progress…

LIMITED TIME S*LE!
A very rare reduction indeed and only available for a limited time - more than 50% off in 🇬🇧 and 🇺🇸 (correct at time of posting, book is on a #KindleCountdown deal)
3 steamy and suspenseful reads in 1!
"The twists and turns! I enjoyed each book and loved how they tied together. Didn’t expect the ending...Well done!"
•L•I•M•I•T•E•D••T•I•M•E••S•A•L•E•
***Limited time left***