Often the story of creation is a story in itself, one you feel loathe to tell, but might be just as important as the work you’re creating.

A lot of my books centre on psychology and it’s something I have always been fascinated by. The human mind and its strengths, weaknesses and possibilities are why we write after all. I’ve found with my recent books, 100K is around about the stage I find myself with a first draft. In the first draft I’ve told myself the story, and now instead of telling it, I need to build upon what I’ve already established and embellish the events that make sense of the mystery. It is time to slow it down and explode the smells, sights, feelings, thoughts and dialogue… et al. So in other words, I need to ensure the reader can see exactly what I see. 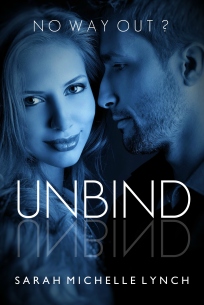 When I was writing UNBIND, the prequel to the novel I’m currently writing, I didn’t want to put a label on the complex psychology of one person in that novel. I still don’t. We all know mental illness is a complex thing, a grey area, and I consciously created a character you can’t put into one box or another. Going forward into the sequel, I had a job on my hands to keep away from that box and still not put this particular person into one category or another.

So when you’ve written about difficult topics in the past (i.e. issues of the mind), you feel like you have to find different ways of exploring those avenues…

I probably would have made myself ill in trying to keep UNBIND at just the one book. I know that sounds freaking crazy!! There was too much story and what I took out of UNBIND, I did purposely, so I could write a whole other story in UNFURL. No way is the sequel a retelling of the first book or a rehash. It’s not the same book, it’s got its own plot, yet some bits elevate and expand upon UNBIND. As an author, it is the hardest thing to know your characters and to try to write their stories without ruining the suspense.

UNFURL came to me so thick and fast and when I read it through last week, I felt the arrangement set into place inside my mind and I knew after that… I knew what I had left to do.

Yet still, the mysterious character I’ve alluded to in this blog is more than just a victim. She’s so much more. She’s an enigma, a mystery that will never be solved. She’s an artist and what I hope I am doing with UNFURL is showing how and why we use art. Why, even, we need art, and what it evokes in our souls.

Cai, our hero, is a dual artist – a photographer and a painter. He has the same gifts his mother mastered – and more. The purpose of Cai’s point of view in UNFURL is to explore that struggle we share, as artists, during the process of creation. A pain that is necessary to produce something that actually speaks to other people.

Instead of focusing on the label, then, I tried to focus on the confusion and mindset of a person who refuses to be misunderstood or even, understood. There isn’t even a middle ground. There is an unrealistic place where things make sense and another place, a worldly place, where nothing makes sense. Basically, there’s an artist who had her talent ripped from her… and her ability to create was tainted. Imagine if you’re born to create, and you just can’t. The reasons are hard to bear, but must be.

I wrote about life as art in another blog and I’m trying to follow through on that with UNFURL, a book that doesn’t play by the rules but when knotted to UNBIND, side by side, makes sense and yet, whether an injustice can be ever be truly resolved, we may never know…

As a writer, you know, anything can happen during the editing process. It’s a miraculous, thing, editing. Maybe like Rorschach in Watchmen, whose mood changes constantly, whose mask expresses him better than his own face, a writer can keep trying to paint the truth but only the reader can give the book its truth. So like an artist trying to paint a picture, I’m trying to use the tools (words) at my fingertips to explain what creation feels like, to explain why creatives need creation and what could happen if someone born to create had that ability tragically stolen from them.

Perhaps that’s why a novel is a novel and why sometimes, you can write all those words, only for one truth to come out of all of it.

It’s a work in progress… for sure!

(Hopefully this was an annoyingly spoiler-free preview)!

A very rare reduction indeed and only available for a limited time - more than 50% off in 🇬🇧 and 🇺🇸 (correct at time of posting, book is on a #KindleCountdown deal)
3 steamy and suspenseful reads in 1!
"The twists and turns! I enjoyed each book and loved how they tied together. Didn’t expect the ending...Well done!"
•L•I•M•I•T•E•D••T•I•M•E••S•A•L•E•
***Limited time left***
Anyone want an office dog? She can’t decide if she wants the chair or the floor, wants to be in or out, and when she gets bored just barks at everything out of the window. And I thought whippets were meant to be good with warm weather! #whippetsofinstagram